HomeIndia NewsNDRF team saved the life of a person in the dark of...
India News

NDRF team saved the life of a person in the dark of night in Himachal, see 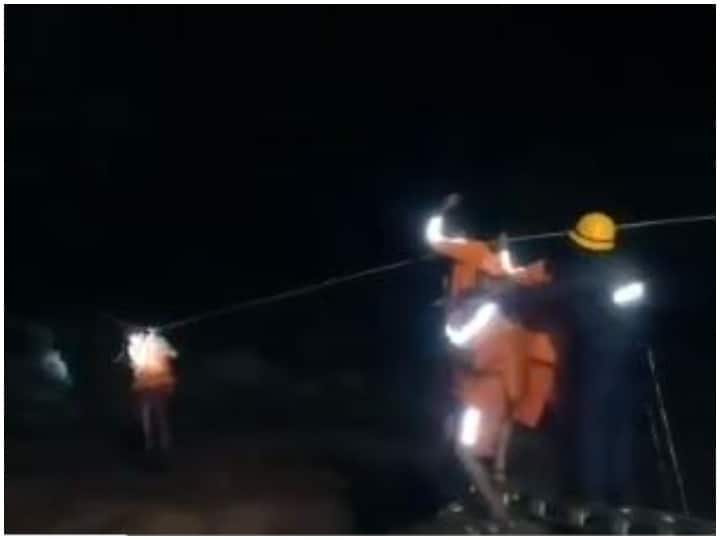 Cloudburst caused havoc in Himachal Pradesh’s Dharamsala. At the same time, due to the boom in the rivers and streams, the local people are scared. In such a situation, now a video has surfaced in which the NDRF team is seen saving a person during the night.

In fact, Sunil, a resident of Rajol village, got stuck between the drains due to the sudden floods in Dharamsala, after which the NDRF team saved Sunil in a very dangerous way late at night. The video of this rescue work has surfaced on social media.

In this video, it can be seen that the NDRF team is taking out Sunil trapped by putting a rope over the drain flowing due to strong current. Let us tell you that the cloudburst has caused a lot of damage. Many vehicles got washed away and many hotels were also damaged.

In a most difficult and technical operation precious life of Sunil of vill Rajol,Shahpur Kangra was saved by NDRF during the midnight. victim was trapped between two seasonal nullahs in spat due Flash Floods in Dharamsala and areas around yesterday. @satyaprad1 @NDRFHQ @PIB pic.twitter.com/xhSMY5BwdE

2 people killed 10 missing due to disaster

The State Disaster Management Authority has said that two people have died due to the natural calamity, while 10 people are still missing. Also 20 people are stranded at different places in Kangra district. Four people have been rescued from the flood-hit Boh village, while more than 100 people, including some relatives and 80 students, were rescued by trekking to Triund.

The situation arising out of rain is being closely monitored: Prime Minister Narendra Modi

Prime Minister Narendra Modi on Monday said that the situation arising out of heavy rains in Himachal Pradesh is being closely monitored and all possible help is being extended to the hill state. Union Home Minister Amit Shah spoke to Chief Minister Jai Ram Thakur on Monday to take stock of the situation arising out of flash floods in several districts of Himachal Pradesh and assured him of all possible help from the Centre.