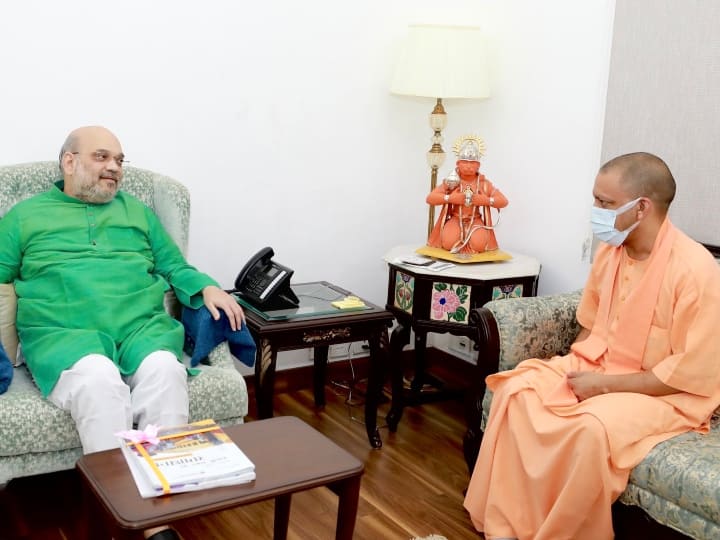 New Delhi: Will the Yogi government expand the cabinet in the coming days or has the BJP started a great churning from now on for the elections to be held early next year? Actually, Uttar Pradesh Chief Minister Yogi Adityanath reached Delhi on Thursday. After this he met Home Minister Amit Shah. This meeting lasted about one and a half hours.

Yogi Adityanath was present at Amit Shah’s residence when Apna Dal chief Anupriya Patel also reached the residence. He held a meeting with Amit Shah. Shah and Patel’s meeting is being seen as BJP’s attempt to woo allies ahead of the upcoming assembly elections. Patel was a minister in the central government in the first term of Prime Minister Modi, but when he became the Prime Minister for the second time, he did not give the leader of his party a place in his cabinet.

Shah tweeted and informed about the meeting with Adityanath and Patel and also shared pictures. At the same time, Yogi Adityanath tweeted after the meeting, “Today, met Union Home Minister Amit Shah in New Delhi and received his guidance. Hearty thanks to the Home Minister for giving his valuable time for the visit.

Along with this tweet, Adityanath also shared a picture in which he is seen handing over a copy of the report “Solution to the migrant crisis” to Shah.

Hearty thanks to the respected Home Minister for giving your valuable time for the visit. pic.twitter.com/1q1qYnrYq7 Yogi will meet PM tomorrow
Yogi Adityanath will meet Prime Minister Narendra Modi and BJP President JP Nadda on Friday. Just a few days ago, BJP’s National General Secretary (Organisation) BL Santosh and the party’s state in-charge Radha Mohan Singh had visited Lucknow and reviewed the party’s preparations for next year’s assembly elections. Both the leaders had met the state government ministers and key officials of the organization during this period.

Cabinet expansion speculation
After this, after Adityanath’s sudden arrival in Delhi and meeting the central leaders, once again the speculation of cabinet expansion in the state has intensified. These speculations were further strengthened when sources claimed that Nadda met Prime Minister Modi and former Union minister Jitin Prasada, who had joined the BJP a day earlier, met Chief Minister Adityanath. Prasad, however, termed the meeting as a courtesy call.

AK Sharma, a former administrative officer and member of the Legislative Council, who recently joined BJP, is also in Delhi. Sources say that he met some central leaders of the party. Sharma is considered close to Prime Minister Modi.

BJP leaders or senior party functionaries did not give any official information about this round of meetings, but sources claimed that this exercise is about the induction of some other leaders including Prasad and Sharma in the Uttar Pradesh government. Prasad is from a well-known Brahmin family of the state, while Sharma belongs to the Bhumihar community.

Share
Facebook
Twitter
Pinterest
WhatsApp
Previous articleBCCI announces Team India for Sri Lanka tour, Dhawan will be the captain and Bhuvneshwar will be the vice-captain
Next articleWhen Deepika Padukone revealed the secret to Alia Bhatt, I hate this act of Ranbir Kapoor

Tokyo Olympic 2020: At the age of 58, this player won the Olympic medal in his name