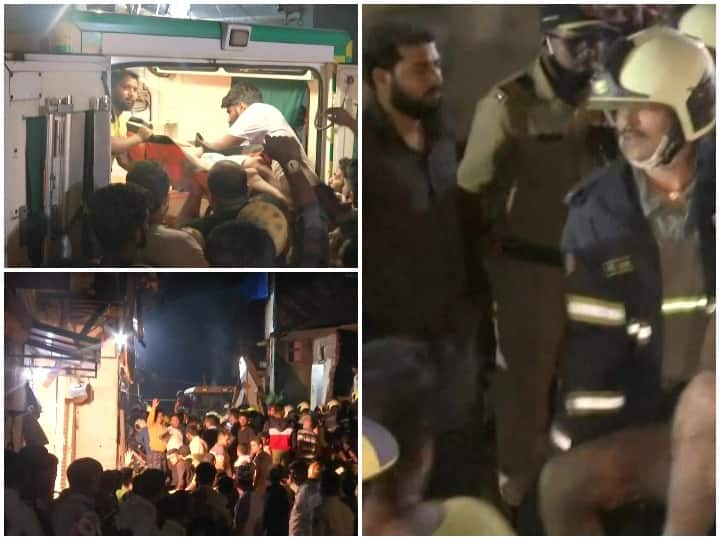 Mumbai: A major accident occurred due to heavy rains in Malad West, Mumbai, in which till now 9 people have died and 8 people are getting injured. In fact, nine people died after a building collapsed in the New Collector’s Compound in Malad West, Mumbai late on Wednesday night. After which 15 people including women and children have been rescued in the rescue operation. 8 people injured in the accident have been admitted to the hospital.

building collapsed due to heavy rain

It has been informed by BMC that this accident happened due to the collapse of a four-storey building in Malad West. After which two more buildings opposite this building were demolished and 2 children were rescued from there. The BMC says that the building was in a dilapidated condition and due to heavy rains, it became a victim of the accident. At present, the rescue operation is going on and the search is on for the injured.

#UPDATE | Nine died, 8 persons injured after residential structures collapsed in New Collector compound, Malad West of Mumbai. Residents from 3 nearby buildings evacuated as structures are not in good condition. Search & rescue operation for trapped people is in progress: BMC

Maharashtra Minister Aslam Shaikh says that buildings have collapsed due to heavy rains, rescue operation is on. The injured people have been admitted to the hospital. The building is being removed to rescue the rest of the people trapped under the rubble.

Let us inform that the Indian Meteorological Department (IMD) had announced the onset of Southwest Monsoon in Mumbai and its surrounding areas on Wednesday. On the other hand, due to the monsoon, heavy rains lashed the country’s financial capital and its suburbs in the morning, causing waterlogging at many places and disrupting local train services. According to the IMD, the western suburb of Santa Cruz received 164.8 mm of rain in the six hours from 8:30 am to 2.30 pm.

Read also:
Agriculture Minister Narendra Tomar said- Government is ready to talk to farmer organizations, tell where is the objection in agricultural laws

Amidst the controversy, Twitter told the Government of India – will make every effort to follow the new guideline